Are you heading to Sicily soon and trying to decide if you should rent a car or use public transport?

I’ve written this guide based on my time driving in Sicily and renting cars in Sicily for work and personal travel.  I’ve also tapped into my Sicilian family for their advice.

You may also want to read our Complete Guide to Renting a Car in Italy.

This page contains affiliate links. If you purchase from the links, we may earn a small commission, at no extra cost to you. Please see our Disclaimer for more information.

Should You Rent a Car in Sicily?

Yes – Renting a car in Sicily is the best way to see all the island has to offer.  Having your own car on the island gives you freedom, flexibility, and access to many destinations that are difficult (or impossible) to visit with public transport.

If you’re only staying for a short time and planning on visiting one of the larger cities (like Palermo or Catania), you’ll be fine without a rental car.  In fact, I recommend avoiding a rental car in this case.

If you’ll be visiting Catania or Palermo at one end of your trip, only rent a car for the non-city portion of your trip.  Parking is pricey and can be complicated, and you won’t need (or want) to drive a car in a major city in Sicily.

Good To Know:  It is possible to see Sicily by public transport (I’ve done it!).  However, you’ll spend a lot of your vacation time waiting for trains and buses and the services aren’t always frequent or on time.

Required Documents for Renting a Car in Sicily

Helpful Tip:  You must obtain an IDP in your home country.  If you need to get one while you’re abroad (yours is lost, stolen, or expired) you can often do so by mail.

You may want to read
International Driving Permit for Italy – Why & How to Get One
Can I Drive in Italy with a US Driver’s License?

Best Places to Rent a Car in Sicily

The main car rental locations in Sicily are at the Catania airport (CTA) and the Palermo airport (PMO).  You can also rent a car in the city centers of Catania and Palermo.

Read our guide to Renting a Car in Catania.

The best place to pick up your car depends on the structure of your Sicily trip:

Flying to Sicily and Heading Straight Out to Explore the Island

Prices at Sicily’s airports tend to be slightly higher than renting in the city centers (due to airport taxes).  However, the airport locations have more vehicles, a larger variety of vehicles, and the operating hours are longer.  It’s also more convenient and quicker to rent your car at the airport if you’re flying into Sicily.  You avoid having to get transport into the city center, having to deal with city traffic, and possibly getting a ZTL fine.

Example: I recently flew into Catania (CTA) and immediately headed north to Mt. Etna and Taormina.  Next, I visited the Val di Noto and a few more small towns.  After some time in Palermo, I flew out of the Palermo airport.  For this trip, I picked up my rental car at the Catania airport (CTA) and dropped it off at the Palermo airport (PMO).

Visiting Your Arrival City Before Exploring the Island

If you’re flying into Sicily and you want to spend time in your arrival city before exploring the rest of the island, rent your car from the city (unless your desired car is less expensive or only available at the airport).

Example:  Fly into Palermo and spend a couple of days visiting the city’s sights.  Then, rent a car in the center of Palermo (Via Messina), explore the western part of the island, head back to Palermo, and return your car to the Palermo airport (PMO) before flying to Rome to continue your trip.

Tips for Renting a Car & Driving in Sicily

Good To Know:  You can enter a ZTL in two cases: 1) The ZTL is ‘NON ATTIVO’ or non-active.  You may also see a green light or ‘OPEN.’  In this case, you’re free to enter.  2) If the ZTL is ‘ATTIVO,’ or active (or red light or ‘CLOSED’), you may only enter if you have permission.  Who has permission?  Local residents, guests of hotels in the city center, customers of parking garages, and others (like workers).  Again, save yourself the headache (and possible fine) – know what ZTLs look like and avoid entering them.

Read more in our Complete Guide to ZTLs in Italy.

Good To Know: On our recent visit, the new Ragusa-Siracusa Autostrada was open but the toll booths weren’t ready, so in the meantime, you can drive on it for free.

You may also want to read about
Driving in Italy

Alternatives to Renting a Car in Sicily

As I mentioned earlier, you certainly can see Sicily without renting a car.

You can either take a tour for your entire trip or take day tours from larger cities like Catania or Palermo.  For example, you can visit Agrigento or Corleone on a day trip from Palermo.

Sicily’s train network runs throughout the island, with the main lines running between Palermo and Messina and between Catania and Siracusa (Syracuse).  There are no high-speed trains in Sicily.

Trenitalia operates Sicilian trains, except for the Ferrovia Circumetnea, which travels around the base of Mt. Etna.

Buses are the best way to see the smaller inland villages and towns if you don’t have a car.  You can catch the buses from all major cities.

While it’s certainly an expensive option, if you want the flexibility of renting a car, but don’t want to drive, you can hire a private driver (NCC – noleggio con conducente) to show you around the island.  You could also choose to hire a driver for a day.

I’ve cycled in Sicily and if you stay on the smaller countryside roads, it’s a beautiful way to see the island.  Bike tourism is popular and continues to grow, especially in the southeastern corner.  There aren’t many bike shops, so it’s best to carry spares of parts.

Renting a Car in Sicily with Kids

You’ll need to focus on most of the same things you think about when renting a car in Italy.  I’m often asked if car seats are always available.  Make sure you reserve the seat at the time of rental (vs. waiting until your arrival).  Or, travel with a Bubble Bum portable inflatable car seat.  They’re handy for rental cars and taxis for older kids.  We use them for our 5- and 8-year-olds.

Remember that even though distances between towns and cities aren’t large, the actual driving time can be long because of the road quality and winding roads.  Make sure you have activities (car bingo, quiet books, tablets, etc) and that you’ve stocked remedies for car sick-prone kids.

Good To Know:  There’s quite a bit of trash on the sides of roads in Sicily.  We had some conversations about why and how to solve the problem.  It may come up for you too.

Enjoy your time driving in Sicily!

Is there UBER in Sicily?

UBER Black arrived in Palermo in 2022.  The service isn’t like the traditional UBER you may know and love at home. UBER Black consists of professional drivers and luxury vehicles – with a price tag to match.

Can I take my rental car on the ferry from mainland Italy to Sicily?

While you can physically do it (the ferry will let you on), most rental car companies prohibit it (check with the individual company).

Can I drive my rental car from Sicily to mainland Italy?

Which car rental companies have locations in Sicily?

Are minivan rentals available in Sicily?

Yes, you can rent a monovolume in Sicily.  Some are smaller than typical minivans you’d find in the US, so make sure you enter the number of passengers when you’re reserving your vehicle.  For example, I drive a ‘minivan,’ but it only seats 5 people. 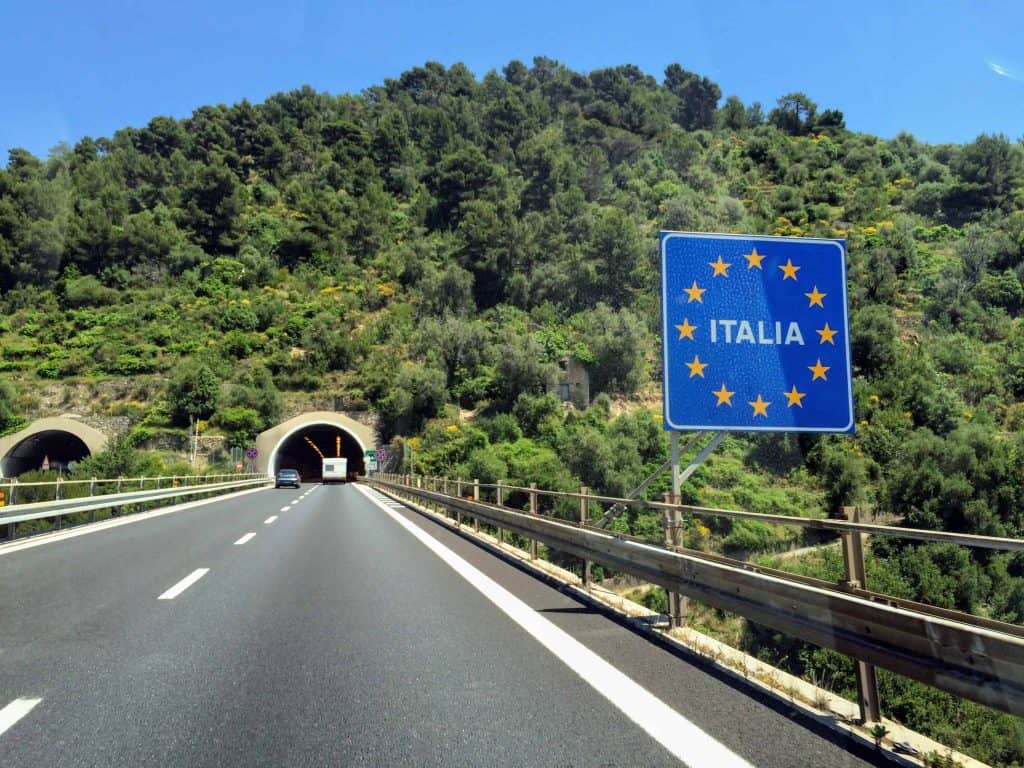 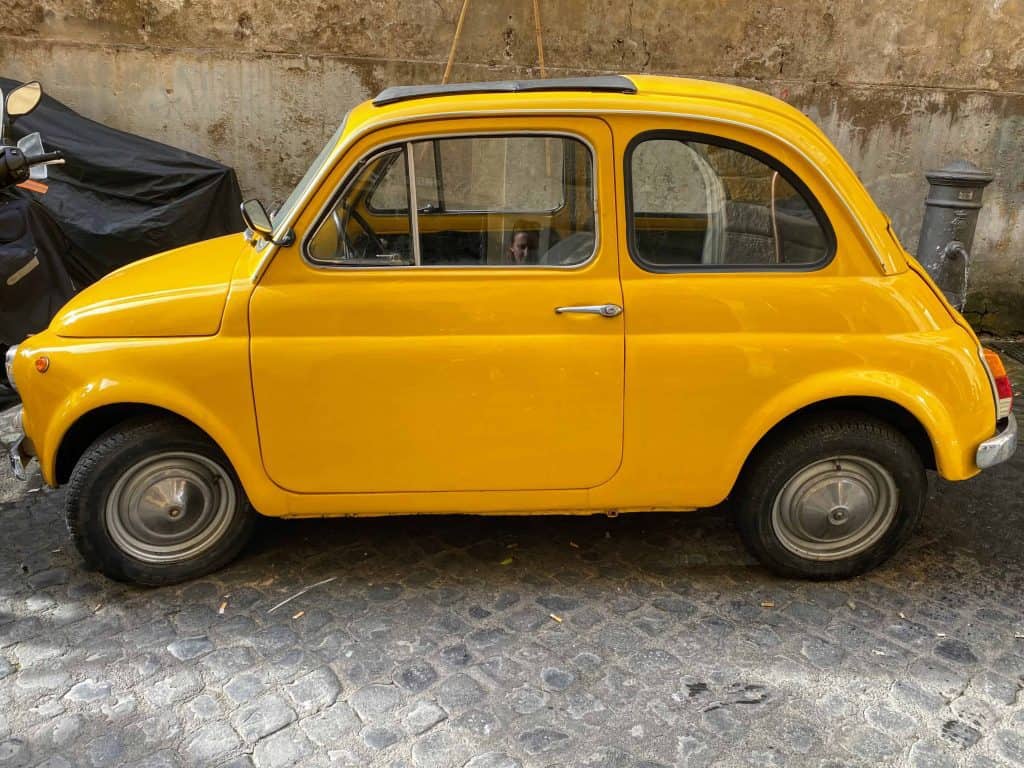